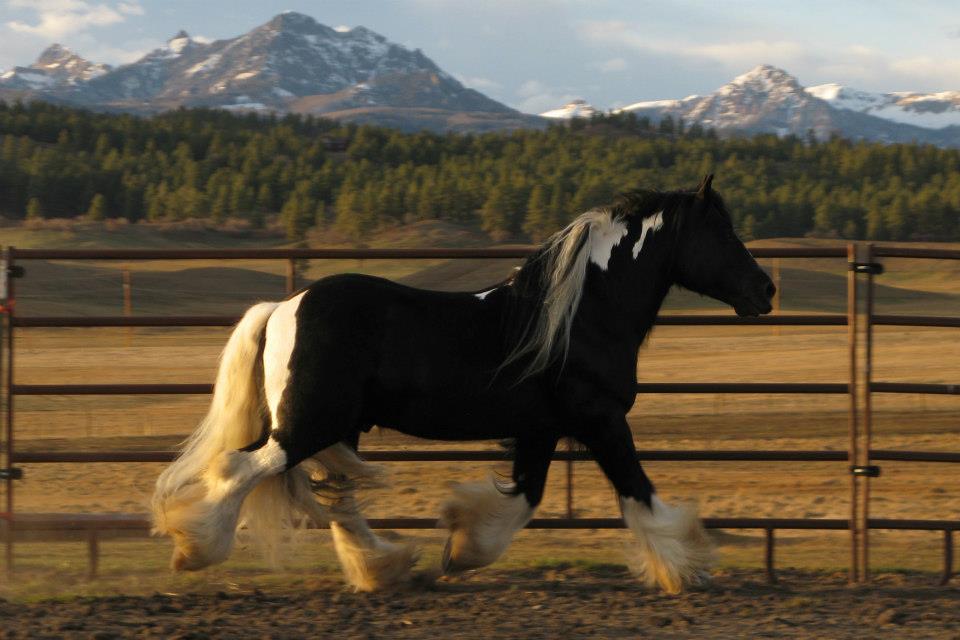 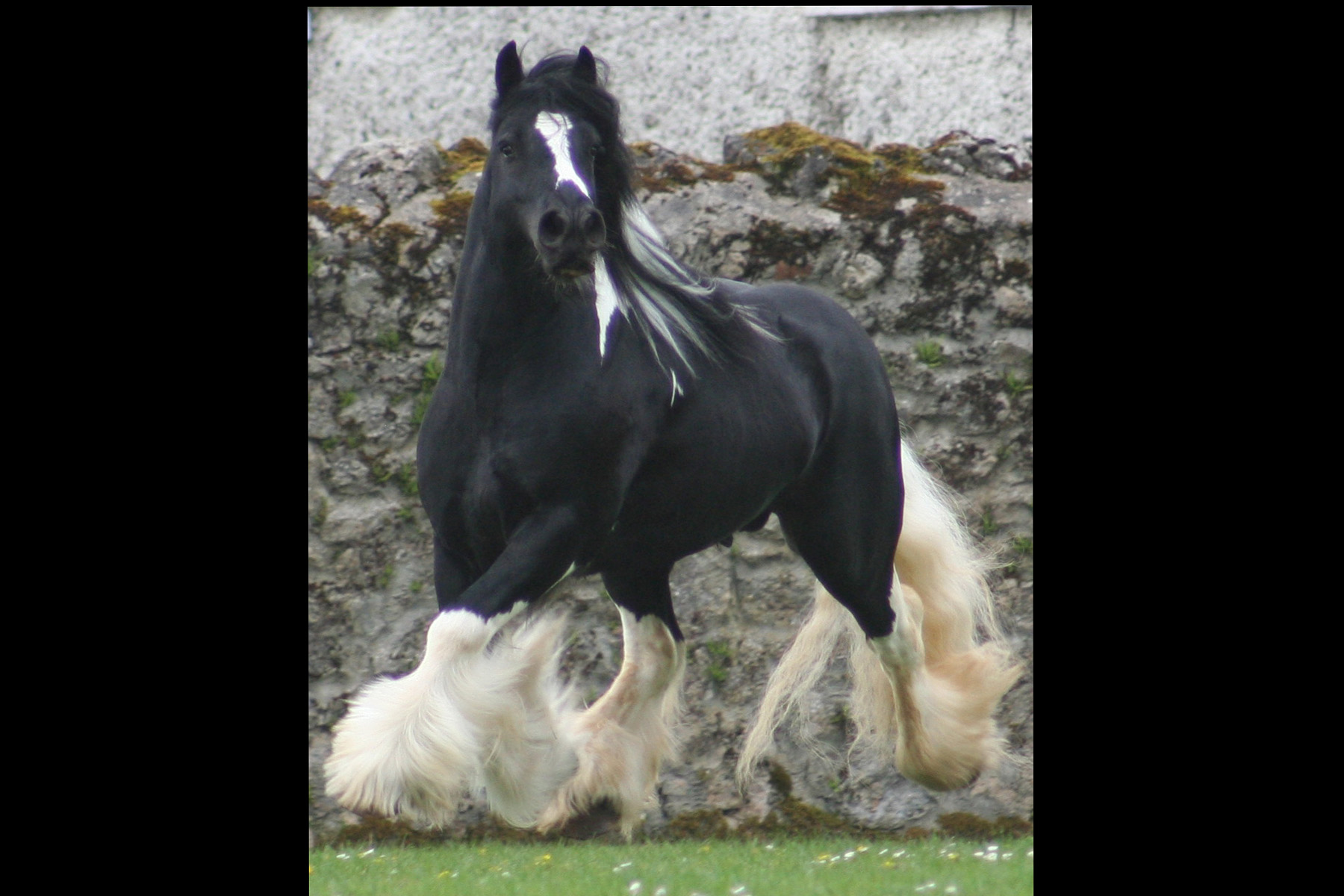 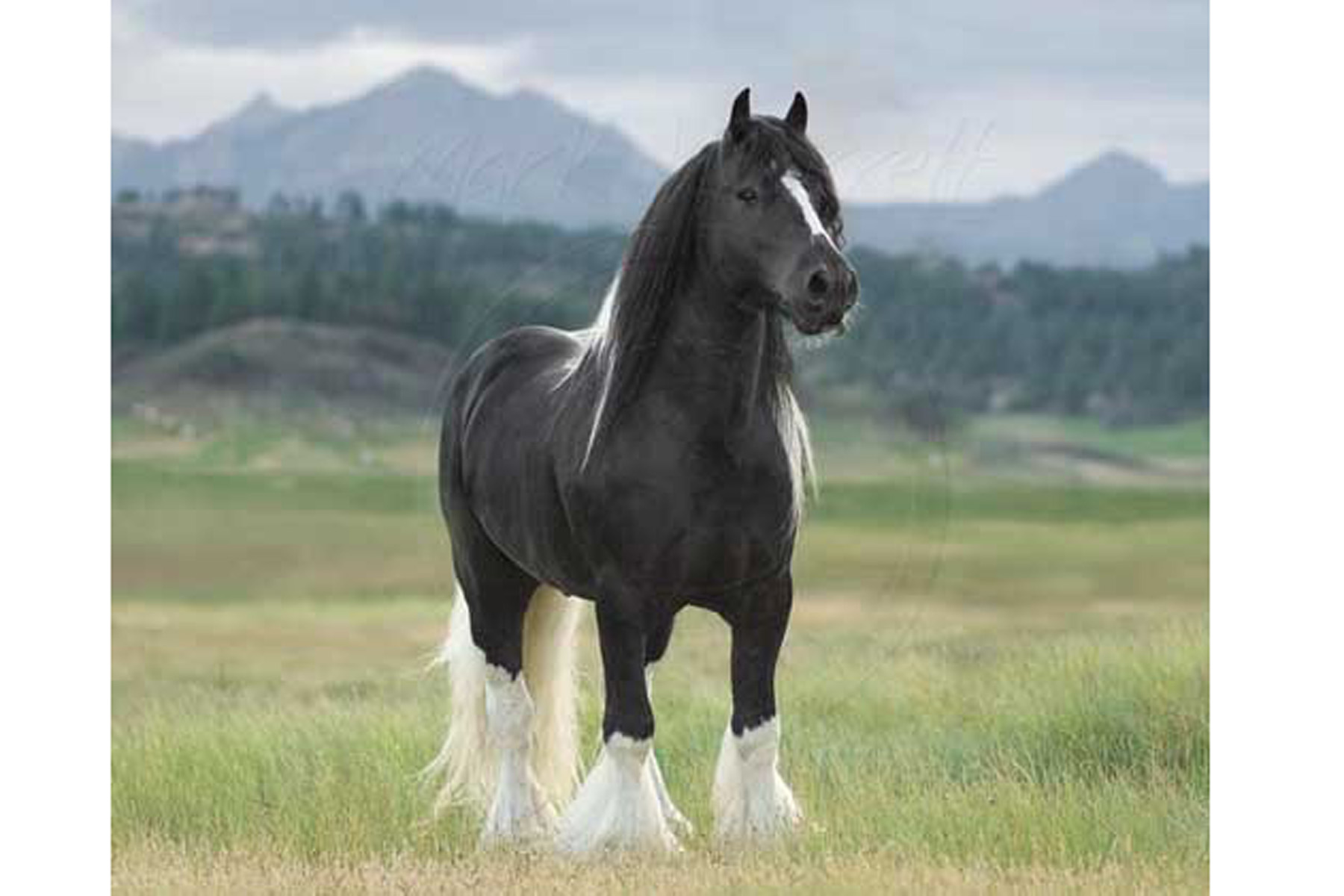 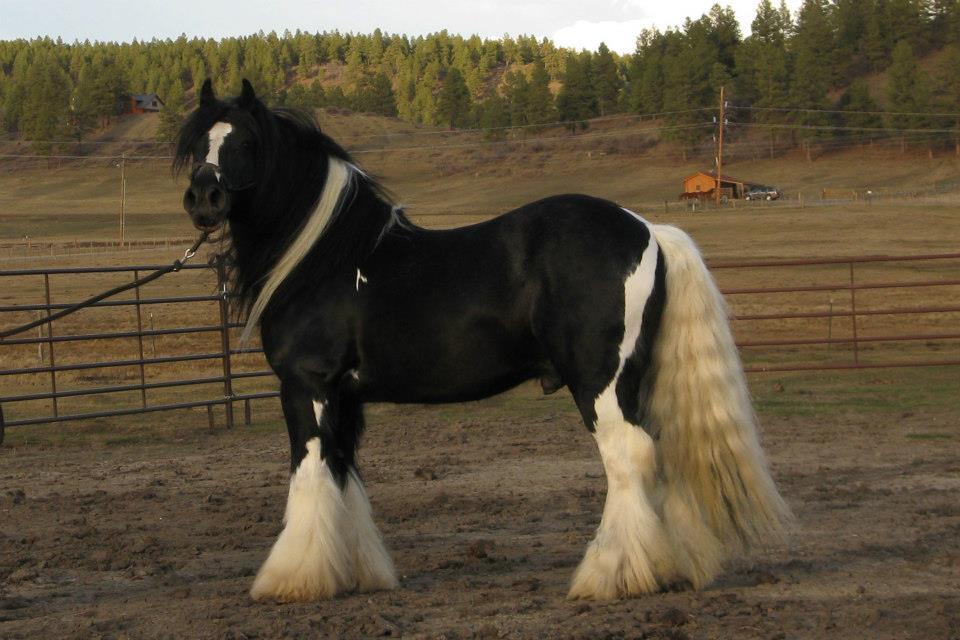 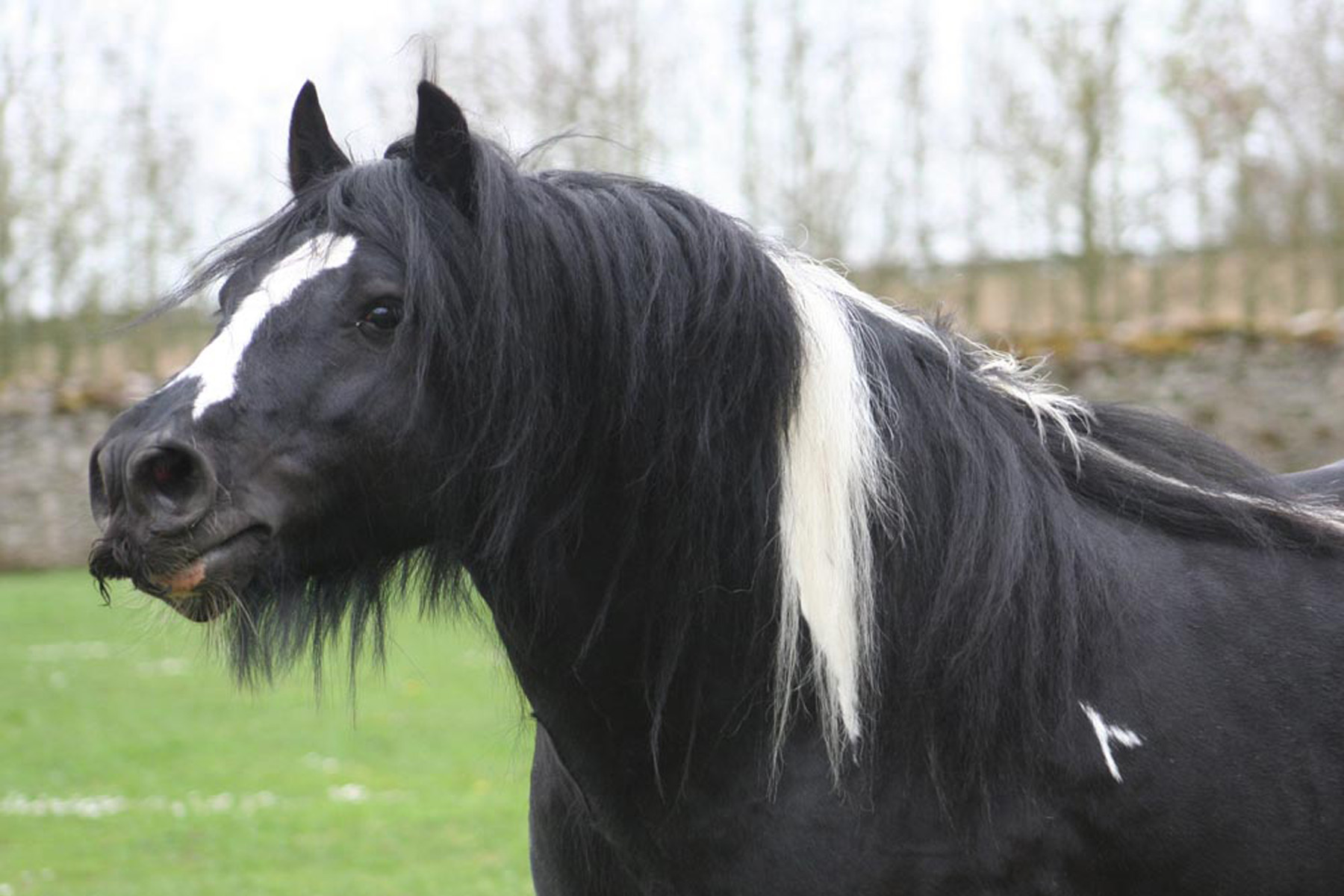 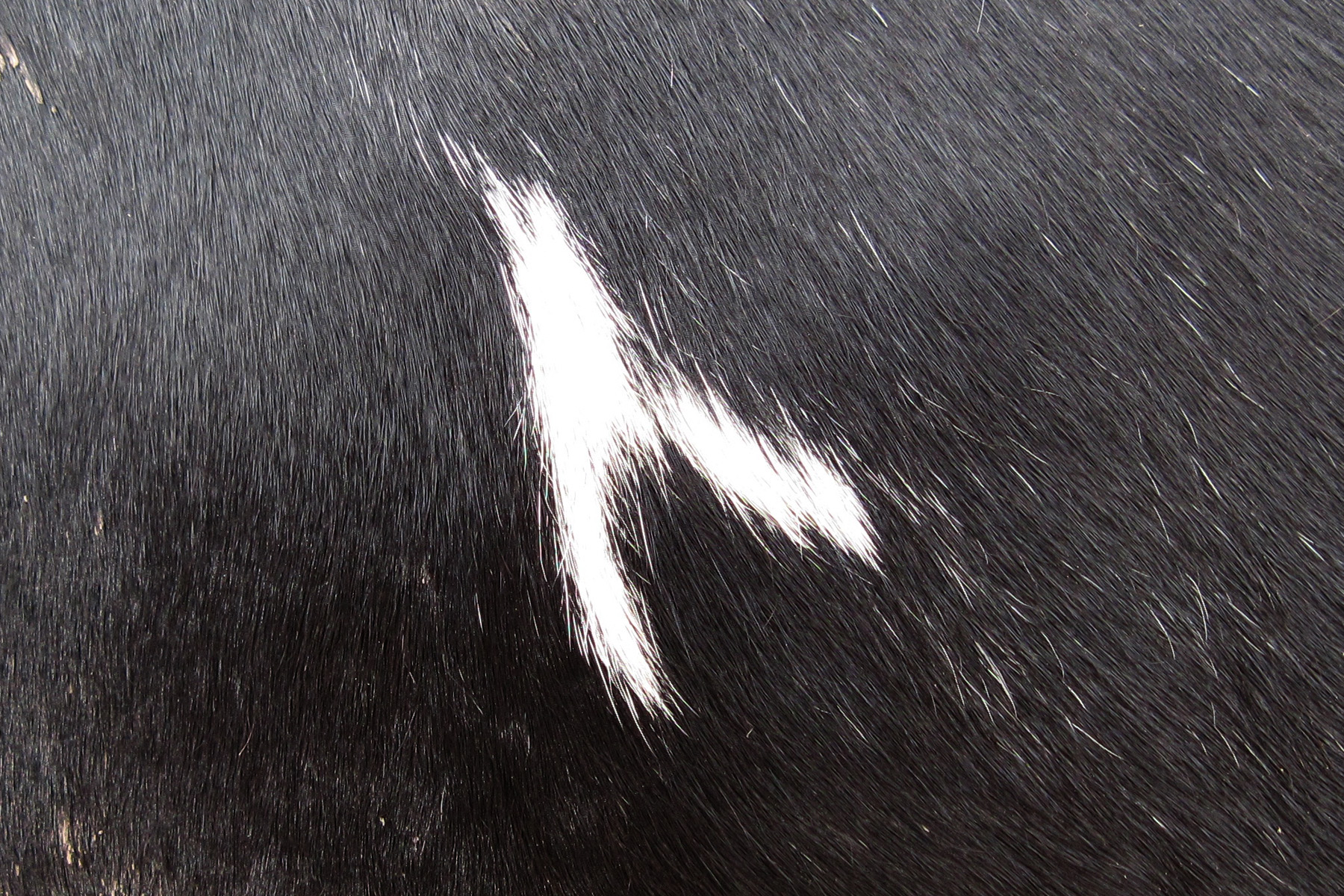 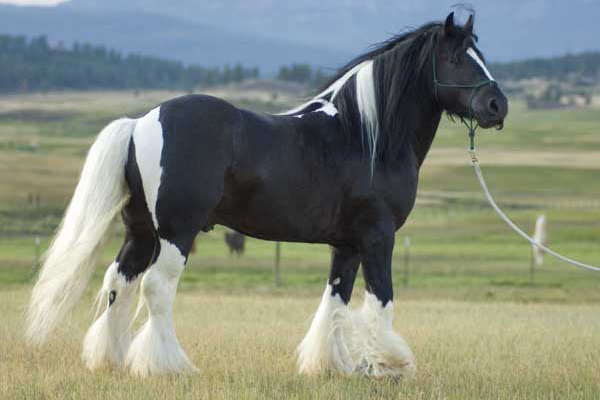 When we purchased The Irish Black Faced Mare, bred to The Hustler for her 2007 foal, every time we showed his photo as her service sire people they said “WOW, who is he?” Our daughter Kate was especially smitten so we contacted Deirdre at Clononeen Farms and decided to go to England to see The Hustler as well as several other stallions. We were amazed when we saw The Hustler to have found a stallion we believe would be a good cross for all of our mares. The Hustler is a breeders’ dream come true and an excellent example of the breed. He possesses all of the qualities we want in our foals:

• an “apple” shaped rump when viewed from behind

To top it all off, he is more black than white, our personal preference. Did you notice the white wishbone marking on his shoulder? We think he is lucky and so are we to have been able to acquire him. Now, with several foal crops on the ground, he has proven to be very pre-potent, adding his presence, wonderful breed type and a bit more black to his offspring.   See our SSFR Anna and her offspring.

A couple years ago people in the US began genetic testing their Gypsy Vanner horses for a marker of a disease called PSSM1.  Although the gypsies to the day do not believe that this disease, which causes tying-up, affects this breed and I have yet to know of any horse diagnosed by a veterinarian as having suffered from PSSM1,  public opinion remains negative toward carriers.   I personally think that fearing PSSM1 in these horses is silly but we are breeders.   As breeders, we have decided to follow the Irish Cob Society strategy for removing this marker from the population.    We will no longer use a stallion who carries PSSM1.  For that reason and to give him a life with other horses we have gelded The Hustler.  As they say, “A great stallion makes an even greater gelding.”  Hustler is already trained to ride and drive.   Right now we are planning to use him on our show string for 2018.   8/17