The Value of Genetic Testing 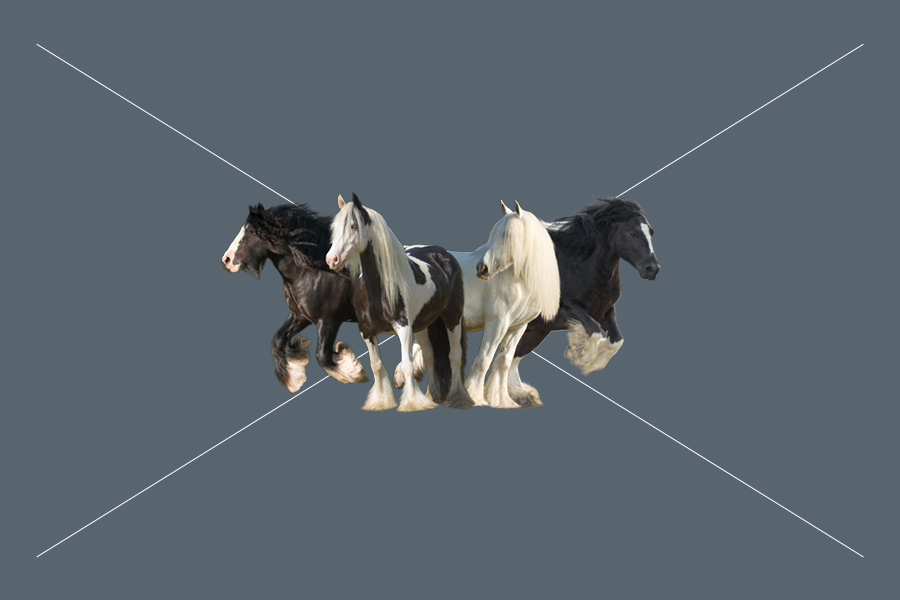 As a lover of color genetics, I am used to working with testing results.  I also understand that when terms like ‘homozygous’ and ‘heterozygous’ or ‘dominant’ and ‘recessive’ sneak into the conversation that many people tune out or just shake their heads and walk away.

In the case of color genetics, they are not something most Vanner breeders need to worry about.  The only potential issue I know of as discoverable with color genetics is a problem which can cause vision issues when two silver dapple horses are bred together.   Genetic testing for the presence of inheritable diseases, however, is an important and invaluable tool for all breeders.  Unfortunately, testing results can also be misunderstood and misused.

There are not yet any genetic testing standards for our breed.  I applaud Vanner breeders who understand and use genetic testing information to help them make informed breeding decisions. To date, however, much of the Vanner community’s response to genetic testing results has caused fear and discouraged many from testing.  When one is blindsided by the testing results, for their otherwise healthy horse, one’s inclination is not to borrow any more trouble.  This seems especially true in the case of testing for PSSM1.  Of course, everyone has the right to decide what they want in their breeding herd but the public shaming of those who do not share ones opinion and the lack of scientific based education being offered to the new buyer population are of concern.

All animals, including humans, inherit characteristics from their ancestors.  Before genetic testing, it was impossible to know what characteristics would be passed on until offspring carrying them were produced.  For all parings, there is a 50% chance for each parent to pass, on a given gene each time a pairing is made.  For some genes one is enough to cause symptoms of a genetic disease.   For others it takes 2. Thus one would expect, the process of identifying so-called ‘carrier’ individuals was often slow.

Many breeders of animals now use genetic testing to predict and, in some cases, to avoid specific gene combinations which offspring might inherit.  With color testing, many results are completely predictable.  When one breeds a red horse to a red horse, they will never produce a black based horse.  (Of course modifiers can make a red horse “look” black.)

With genetic testing for inheritable diseases, each gene being tested for has its own characteristics.  As a result, the importance of each test result must be evaluated individually.   Not all inheritable diseases are well enough understood to be completely predictable either.  The presence of a marker in an individual’s genetic makeup confirms the presence of the marker but it does not always mean that the individual who carries it will develop any clinical symptoms of the disease.  This is further complicated by the fact that some diseases also require environmental conditions or an additional gene for clinical symptoms to be displayed.

PSSM1 (polysaccharide storage myopathy) is a hereditable genetic disease which I mentioned before.  In some breeds, like the Quarter Horse, the disease can be very serious. In the simplest of terms, glycogens (sugars) build up in the muscles because the muscles do not break them down normally.   An affected horse may be reluctant to move, sweat profusely, and become stiff and painful.  These symptoms lead to dehydration and the destruction of muscle cells which can cause kidney damage and even death.  Certain environmental factors, such as an inability to exercise (being confined to a stall or small pen) combine with a high starch, high carbohydrate diet (i.e. grains), tend to trigger PSSM1 symptoms.

It is also important to note that not all horses that tie-up do not carry a PSSM1 marker.  The only horse we have ever seen tie-up was our daughter’s barrel horse, a Quarter Horse.  Maggie was hospitalized for several days but came through with no lasting effect.  Much to our surprise when tested, she did not carry PSSM1.

Although the buildup of glycogen has been found to occur on a cellular level in Vanners, the PSSM1 symptoms of tying-up do not seem to be occurring.  Since PSSM1 testing has become more widely utilized, often as a pre-purchase exam question, the increased testing is revealing more and more carriers.  Yet, no Vanner (that I know of) has been confirmed by a veterinarian to have tied-up as a result of carrying a PSSM1 marker.  It would seem to me that there would be lots of cases of tying up being reported. The same logic applies for Vanners that carry 2 markers for the disease.  Even though I strongly believe that this marker should be bred out, I personally do not think the presence of a PSSM1 marker should be considered detrimental in Vanners, due to the absence of clinical symptoms in carrier individuals.

As with their draft horse ancestors, the probable source of the PSSM gene, the symptoms are often avoidable and manageable.   I am not alone in holding this opinion.  Please refer to the article in The Vanner (2017) by Jackie Johnson, titled PSSM1 in the Gypsy Vanner, found on page 124, and also available on the GVHS website under ‘Educational Bulletins’.   Also, based on a study done by Dr. Valberg at Michigan State University, The GVHS Board advised that PSSM1 could be eliminated from the Vanner breed over time without eliminating quality breed type horses from the gene pool.

( Kathy, I would like to know where this recommendation appears so I can cite it as I did the Vanner magazine article.)

I have only recently learned more about another inheritable disease called FIS (Foal Immunodeficiency Syndrome). FIS, although rare, can be found in our Vanner breed and is likely present as the result of their Dale and Fell Pony ancestry.  A horse must have two copies of this gene to be affected.   This disease causes foals to die, often by the time they are 3 months of age.  To me, this disease is tragic and far more significant because it does cause clinical symptoms, it cannot be managed, and there is no cure.

The fact is, that many animal registries require genetic testing for inheritable diseases.  Breeding age Quarter Horse stallions, for example, are tested for five genetic diseases and the results are printed on their registration papers.  Many leading stallions are carriers of one or more inheritable disease markers.   By properly using genetic testing to make informed breeding choices, mares which are free of those markers can be selected for those pairings.  In this way top quality individuals of both genders can continue to contribute to the Quarter Horse breed.

It is my hope going forward that Vanner breeders will recognize the usefulness of genetic testing for the long-term health of our breed.  Genetic testing is only a tool.  Used properly it will allow us to identify potential genetic issues and make it possible for breeders to make knowledgeable and safe pairings.  People who are open about the presence of genetic markers in their otherwise healthy horses, should not fear condemnation as being disreputable breeders.  Neither should the horses be viewed as flawed or valueless.  That kind of response discourages openness, takes away a valuable breeder’s tool, and will harm our breed as a whole.

There is no genetic test for what I believe is the most important issue in the Vanner, CPL (Chronic Progressive Lymphedema).  It is thought that CPL came through the Vanner’s draft horse ancestry, where it is pervasive.  CPL varies in severity and is suspected to be hereditary.  Dr. Affolter, of the University of California at Davis, has extensively studied the disease.  She has yet to identify a specific causative gene or trigger.

Again, in the simplest of terms, CPL causes a buildup of lymph fluid in the lower legs.  This buildup leads to swelling, skin thickening, the development of skin folds, nodules and ulcerations.  Management of CPL horses must be based on the individual and can be intensive.  Depending on the severity, it can result in lameness, disfigurement, secondary infections, and premature death.  CPL may well be the underlying reason for the premature death of many well-known sires in our breed since it is often found in conjunction with heavy feathering.

Affected individuals can be maintained through a special diet and regular exercise (interestingly, similar to that suggested for PSSM1 carrier individuals), as well as attentive care to avoid secondary infections.  No cure has been found.  In my opinion even the presence of CPL is not a reason to completely eliminate quality horses from the gene pool.  Selective pairing with unaffected individuals can allow CPL affected horses to continue contributing to their breed.